I fell in love, and the days were bright and my life was full.

I fell in love, yet the nights are long and restless and empty.

I heard your words, and my heart was overflowing with emotion.

I heard your words, but words forgot their meanings, all jumbled in half truths.

I knew my worth, and so did you, so gentle and considerate.

My worth is gone, given up in too long waiting and wanting.

I wanted you, the other part of my heart.

I want you still, but my heart is broken.

A jigsaw with pieces that don’t fit together.

I’ve lost one or two of the essential parts

And I’m stuck. Taking it back to the start

So it seems… but some things don’t reverse,

This rearranging is making it worse.

Am I skewing it? Warping? Distorting somehow?

Trying to rebuild it a different way;

It’s just getting worse, it’s all crumbling away.

And I’ve just realised why; these pieces aren’t mine.

I’m here again, lost in the dance with the black dog;

I’m lost for words but my head won’t stop.

Doubting myself. Feeling so much but I can’t tell

If it’s me or him. He frightens me.

What if I don’t make it back this time?

Some days he hides, just behind the curtain…

I can laugh and joke on those days, but he keeps jumping out at me.

I’m trying; trying so hard to keep the beat

Because I’m not sure what happens if I lose it now.

But I don’t quite believe that myself.

Not for me, anyway.

All the things my brain wants to ask, but the biggest one

Is whether I’d still feel like this if the beast retreated.

Trying to prioritise. Trying to decide which bits can be juggled

And which ones must be put away. Or aside.

Or be thumped all over, for all I know,

Just so the rest is easier to carry

I wonder whether, if my dog decides to leave,

I will be dancing alone.

It was a hot, sunny Monday, the day you were born. I lay in a bath for hours, from early morning right through lunch time, for some relief from the contractions. I worried about your sister, who was with your Nanny but probably wondering why I was gone so long. I worried about your father, who seemed restless and eager to find reasons to leave me alone. Perhaps he was feeling the stress, or the heat.

I closed my eyes and tried to picture your face. In my visions, you had the same brown eyes as your sister and a smile that would melt the coldest heart. Overwhelming love for this person I had not yet met, but kept so close, brought tears to my eyes. My second child, my first son… who would you become?

It was late evening before I met you, and I saw you whisked away, limbs hanging limp from the doctor’s hands. Sheer terror gripped me then, suddenly certain that you would not survive to be the boy in my head. The minutes that passed felt much longer than they really were, while I waited for someone to say something, anything… and then you cried.

The sweetest noise I ever heard, that wail. There was nothing but you after that, as I cradled you in my arms; it was just you and I. Eventually the outside world crept in again, and I gave you up temporarily to be adored by others, while I watched your squashed little face as you adjusted to life outside the womb.

Since then, your life has been a million moments of wonder. You were a quiet little boy, one happy to sit back and watch your sister with her theatrical performances. You let her talk for you for so long, I used to wonder when you would ever feel the need to speak. But your heart-warming smile that made your chocolate button eyes sparkle told me enough; you were happy, perfectly content in our little house, with our little family.

As you grew, you made your first friend. You met her at nursery school and she reminded me so much of your sister. Again, you took a backseat as she shrieked and giggled, happy to be along for the ride. Until the day she shut you in a cupboard, anyway… you cried that day, and sat with me, always a little warier of her after that.

It was a long time until you found your voice. Even at school, “We wouldn’t know there was anything wrong, until he’s crying quietly in the corner. He doesn’t tell us if anything happens… we wish he would!” But to me, you always spoke. I heard your stories of Spiderman and Venom; you directed me as we acted them out. We were spies, burglars, superheroes, squirrel trainers… whatever your vivid imagination conjured up. With me, you could be anything.

You loved song time before bed, would join in with me and your sister, keeping the beat with your djembe drums and singing silliness out loud. Perfect moments in my memory.

I loved to hear you talk about whatever you had learned at school, or from those programs you loved to watch… science, history, nature. A clever lad you were, coming up with theories and ideas sometimes fantastical but often close to the truth. You wanted to know how everything worked and I had my work cut out keeping up with you sometimes.

But I hated your lack of confidence. I hated that you would watch your sister do so much and feel less than her. You were never that, my kind, empathic boy. You found some things harder than she did, without a doubt, but that just meant you tried harder. You were one of a kind, truly remarkable, and you still are.

Now you are 18. My little boy is a giant of a man, with a giant heart to match. I don’t pretend to keep up with your knowledge any more, you ‘science’ much better than I do and I love it. Black holes, nuclear fusion… and still that analytical, logical mind that wants to work out more.

You give so much to people, you shoulder their worries and you care. You care so very much. That makes it sadder that I don’t see that smile so often anymore. I am worried about you.

You, my watcher, seem to absorb the energy of those around you… you are happy when everyone else is happy. I know it is stressful here, with a new arrival imminent and our home opened to others, and I am grieved to see the effect his has had on my boy.

I have let it slide, our Mum and boy time, and I am trying my best to put that right. I hope that you will keep talking to me… never forget that with me, you can be anything. Let’s find our harmony again. 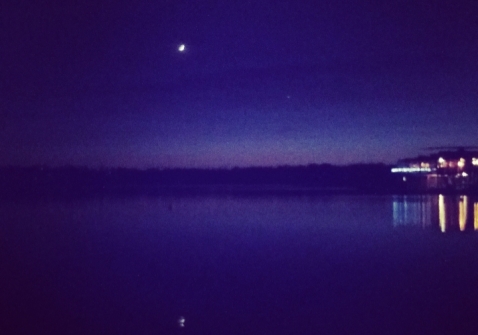 How long has it been?

You picked a night with a barely there, waxing moon and a sky streaked indigo. I can see the stars above and reflected in the water all around. You picked a night warm enough to sit outside and not feel cold, the first night like this in forever.

You always did that, chose the right place and the right night, or perhaps we were always lucky. It used to feel like magic, like the time I started the car and Liam Gallagher sang, ‘I don’t believe that anybody feels the way I do about you now…’ and we just sat and grinned at each other. Those things always happened when you were there with me.

How many years then?

How many years since we last walked this place, sat next to this very lake? It hasn’t changed much, but it isn’t the same. We catch up with each other’s lives, like long lost friends, reminiscing about those perfect, magical times. We laugh about nose twitching and fireworks in Blackpool. You sing to me, like you did in Devon, when you made me drive your car and scared me silly. And you hold my hand.

How long have you been gone now?

I don’t want to count those years. We walk.

A new house, you tell me, a new start. You ask me to hear you out, and I will. A new start that could finally be ‘us’. You’ve made me dinner. You remembered the last time I cooked for you and made me the same meal. You’ve even chopped the vegetables as I did so long ago, even though you laughed at me while I did it… ‘regimented veg’, you said back then.

‘You’re so lovely,’ you say. ‘You haven’t changed at all. Still so beautiful… still my angel.’

You’ve brought me back to reality now. You’ve made me angry.

I’m not the same. My life has gone through so many changes since you last held my hand, so many trials. You broke my heart and disappeared, because you didn’t know how to be brave. You left me alone and hurt, and you broke every promise you ever made me. When I needed you more than anything in the world, you were gone. In your absence, my world fell apart and it was one hell of a journey to put it back together again. I have been braver than you have ever been, and I did it all without you.

How long has it been since I loved you?

But I was brave enough for both of us, and I started over. I made my own peace and found my own happiness. My new start came a while back now; yours is not mine, and I am not your angel.

How long will it be until I see you again?

2) Make (something) the opposite of what it was

1) A complete change of direction

2) The opposite to that previously stated

Brake… back up… reverse…

Run away, build a wall, we’ve been here before.

My heart says yes and my head says run.

Hold back your words

And try not to cry

Stop up the tears,

Don’t say what you want to

It won’t be forever

These feelings will cease

Close up your doorway

And then your heart

Lock it up tightly

And try to restart